The personal stories of Egyptian refugees – Series No.22 of 22

The personal stories of Egyptian refugees – Series No.22 of 22 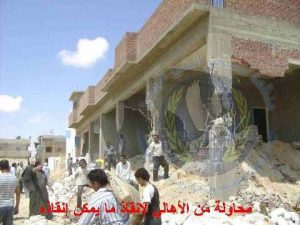 For 35 years, Afaf’s Coptic community was waiting for a permit to build a church. After demonstrating patience for so long, the Coptic villagers became frustrated with the thought of waiting any longer. They began to re-think the use of their property and decided to request a permit to build an orphanage instead. The permit was granted.

The Copts began building the structure, and everything was going fine until the laborers reached the top of the building to begin framing the cupola. Although Copts were within their legal bounds, the cupola was seen as an offense to their Muslim neighbors.

After prayers on Friday afternoon, Muslims came directly from their mosque service to the orphanage under construction carrying cans of kerosene, torches and Molotov cocktails. Some of them stacked piles of wood from the construction site and set it ablaze while others tossed the cocktails up to the framed cupola and set it on fire.

Gun shots were fired into the air to kick start the festivities — their normal practice to intimidate the church community. They ended their fun with yelps of “Allah u Akbar” — giving honor to Allah. None of these folks were declared jihadists but just ordinary citizens of an Egyptian village.

After this, Afaf’s family and church community were required to be at an “arbitration” hearing – a quasi-legal entity outside the courts – so that justice could be served upon this horrible ordeal. The final decision: Afaf’s whole community was forced to turn over their private property to the perpetrators – homes and belongings – and permanently leave their village.

As forced immigrants, some of the Copts re-settled in various parts of Egypt to begin again from scratch. Afaf’s family encouraged her to leave Egypt because it would now be nearly impossible for them to help her as they had always planned.

Afaf is almost 18 years old and now resides in a refugee camp outside of Egypt. She has nowhere to turn. She remains hopeful and firm in her resolve to create a stable life for herself. Western culture will afford her the liberty to practice her religion without fear of repercussions.

Afaf needs our help. The La Casa Futura project is the only concrete solution for Afaf on her journey to achieve her goals. Right now, she must survive the crisis she is in. As we seek to secure the La Casa Futura program for Afaf and others like her, we really need your help.

Donating $5, 10, 20, 50, 100… or more to this valuable project will make a world of difference for Afaf and others like her. Please donate today to save the futures of those who have no choice but to begin life without family or country.

La Casa Futura project currently consists of one dormitory building providing help for up to 100 youths per session. Each session provides language learning, job direction, and cultural understanding. LCF is in its initial phase of development as we seek financial backers and matching funds for individual donations.