The personal stories of Egyptian refugees – Series No.12 of 22

The personal stories of Egyptian refugees – Series No.12 of 22 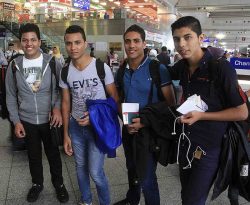 Wafa was a friend to Samuel, one of the boys who created a funny skit mocking ISIS with his friends and used his cell phone to video it — something you might see on Saturday Night Live in America. Many victims of the sub-class use humor to combat hopelessness and angst. Her friend was just 14. He was arrested and sentenced to prison for this “crime.”

Samuel’s story is very sad. When he accidently dropped his phone on a sidewalk without knowing it, this was the beginning of the end for Wafa’s friends. Someone from the neighborhood found the phone and turned it into the police who viewed this comical satire as a dangerous act against the surveillance state.

Shortly after, the police arrested Samuel and his three friends and threw them into a prison cell for four days. When they were released to go home they were given a court date. Everyone knows the whole ordeal hinged on the boys’ identities as “infidels.”

The impact of a day in court for the “infraction” means a jail cell for many years to come. The boys escaped the country before their court date, and thankfully they did. They were convicted in absentee in the Egyptian court — each boy receiving a sentence of five years. They are not viewed as criminals in the free country where they now reside.

This event stirred Wafa into wanting to leave the country.  There is no future in Egypt where there is danger all around and restrictions of her rights — where the bloodshed of the people brought about no substantial change to better human rights issues.

Wafa exited Egypt and hopes to succeed where opportunity still exists. She will eventually find her friends. Wafa is not an economic migrant but a religious refugee settled in a camp with many who have come for other reasons.

With your help, La Casa Futura will free her from this camp and set her on her way. She will be given a chance to adapt to the culture, learn the new language and gain a skill through an internship or perhaps enroll in higher education. She is now 16.

La Casa Futura will assist her in her goals, and we can only do this together. Please join us now by donating directly into the La Casa Futura account at GoFundMe.com and by clicking the link for it below.

Please help us to help Wafa and others like her. Please donate today!