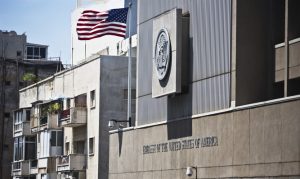 White House official says Trump has decided it is not “wise” to move the Embassy to Jerusalem at this
time.

U.S. President Donald Trump has decided not to immediately move the Embassy in Israel to Jerusalem, a senior White House official said on Wednesday, according to Bloomberg news.

The official said the administration considers its discussions with both the Israeli government and the
Palestinian Authority to be promising, with the PA in particular agreing to talk without preconditions.

The official asked not to be identified because of the sensitivity of the matter.

“We don’t think it would be wise to do it at this time,” the official said, according to Bloomberg. “We’ve
been very clear what our position is and what we would like to see done, but we’re not looking to
provoke anyone when everyone’s playing really nice.”

The comment follow a report last week which said that Trump had decided that the U.S. Embassy in
Israel would remain in Tel Aviv and not move to Jerusalem.

The White House later clarified, however, that “the president has not made a decision yet and is still
reviewing that”.

Earlier on Wednesday, an unprecedented coalition of Christian American pro-Israel organizations,
representing millions of American citizens, called on Trump to announce the Embassy’s move from Tel
Aviv to Jerusalem during his upcoming visit to Israel on May 22.

“We cannot continue blocking the law requiring the US Embassy to be moved to Jerusalem, or to make
the move conditional on future peace deals,” the coalition said in a statement.