After interviewing Coptic religious refugees residing in temporary camps in southern Italy and compiling and publishing their stories in our Series #1 – 22 (please see links below), I now share with you my own personal story of coming to the West that generated my heartfelt interest in initiating the La Casa Futura project. 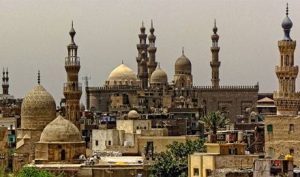 I was born into a Christian Orthodox family and spent my childhood in a Coptic-majority neighborhood in Cairo. I was an introspective child and during my school years stayed alert to my surroundings in order to survive the street. I reacted to what I saw and heard with small rebellions. Like the horse I use to gallop alongside the Pyramid of Giza, I reared up against the restrictions and prejudices of the system that demanded my conformity.

Some of my tension was naturally due to my early pursuit of the independence I sought from my parents, but primarily I was focused upon the much deeper and more insidious problems I learned about my country. As a Coptic Christian in Egyptian society, I was born into “dhimmitude,” a subservient class to Islam. This status was a barrier to anything I could dream of for my future – guaranteed — and along with this came the underlying presence of fear — constant fear in spite of the courage I sometimes displayed.

It was not my imagination that caused me to be fearful but real concerns. The aurora “prayers” of Cairo woke me early every morning around 4 o’clock. The cacophony of competing supplicants blasted from the loud speakers atop the minarets of neighboring mosques. The tempest violated the privacy of my quiet bedroom and disturbed my equilibrium for the rest of the day. I was forced every morning of my life to begin my day with their curses — the few words I could discern out of the entanglement of overlapping cries. Actually, this was the least of my problems.

My dreams were big. The “program” the “infidels” were forced to follow would automatically limit them. There was no way to change this. Blending in was impossible. The Arabic language spoken by Copts in Egyptian society made use of certain expressions and idioms that were immediate identifiers. It wasn’t even necessary for the authorities to ask for one’s religious I.D. card in order to treat a Copt as an outcast.

Therefore, all of us — the Copts — were left with exclusion, discrimination and intimidation. We were observed coming and going from church, regarded as inferior when making a purchase, rejected without explanation on our applications, and subject to physical attacks. This was in the decades of the 1950’s and 60’s. Today, one could say it is worse.

Later, I was blocked from certain schools, sports clubs, the aviation academy, and planning a political career. So finally, I discovered my way out of Egypt. After enrolling in the Leonardo Da Vinci Institute, an Italian architectural school in Cairo, I decided to move to Italy after completing my second year of study.

In order to accomplish this move without the support of my family, my sacrifice was great. As a boy of middle-class upbringing, I never lacked anything. The weekly allowances my father provided me so that I could use city buses and buy books and supplies now went into my savings. I walked to and from my destinations and scrimped on paper and pencils and never attended the movie theatre again. After overcoming many more obstacles that led me to confront Egyptian authorities on my own in order to leave, I made it to Rome with thirty dollars in my pocket. I had nowhere to turn for help.

Italians were open and welcoming. This was well before today’s mass immigration had devastated Italian social services and threatened citizen safety. They were willing to embrace me, take a risk and open opportunities for me. Today, they are still willing to do that for others but with much more reserve and selectiveness. The culture has been assaulted and a greater level of sensitivity is required by immigrants to prove to Italians they are able and willing to assimilate one at a time.

This led me to create and begin the La Casa Futura project for young Egyptians. They desperately need a viable path to transition from refugee camps into Italian life and find independence. Egyptian Copts are the culture of Egypt with the basis for understanding and merging with Western culture and with this most essential distinction differ from economic refugees coming to the West from Islamic nations through mass migration. The Christian Copts are not in league with the Islamic religious-political system but seek instead to detach from its grip.

Many years after my own journey from Egypt I am helping others take similar steps to begin their journeys to the freedom of the West. It is not hard to see just how much more difficult it is to do today given the politicization of such movement due to mass migration. This is why La Casa Futura, which is the only solution currently in existence for Coptic religious refugees, must succeed.

But I can’t do this alone. I need your help, any help you can give, and my promise to you and to young Egyptians is that La Casa Futura will be there to fill the needs of young Christians coming from Egypt seeking a new start. Overlooked by international humanitarian aid that is already overwhelmed , Christian Copts outside of Egypt have only one concrete solution, and that is La Casa Futura.

The La Casa Futura project currently consists of one dormitory building providing help for up to 100 youths per session. Each session provides language learning, job direction, and cultural understanding. LCF is in its initial phase of development as we seek financial backers and matching funds with individual donations.