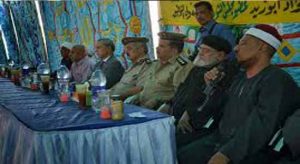 A few days prior to the stand-off on Friday, the streets leading to the village mosque were heavily posted with a threatening provocation ostensibly written by Coptic Church attendees that said, “We re-opened the church against your will.”

The Islamic Bedouin peace process, used for negotiating an agreement between two tribes, arrived in Egypt via Saudi Arabia with the Arab conquest. Today, the technique is utilized to settle issues between Muslims and the indigenous Copts. The Copts submit to prepared agreements that force them as innocent victims into statements of guilt along with penalties, by-passing the courts.

Last week on Friday, October 27, following an attack by jihadists against Copts gathering to pray in a newly renovated church a week earlier, the heads of 1,800 Copts from the village of Al Kashery (Abu Kurkas region of Al Minya) were coerced into a Bedouin Peace Reconciliation meeting after a throng of Muslims (a thousand or more) gathered for prayer outside the mosque and threatened the church across the road.

Expanded numbers of Islamic worshipers for the purpose of intimidating church-goers to the Saint George Church across the road from the mosque prompted police forces to protect Copts against possible violence but also to serve Copts with papers demanding attendance at a Bedouin peace meeting later that day. (Automatically, this means Copts relinquish their own defense and innocence in the matter). Police bolted shut the door of the church building along with the children’s nursery.

A few days prior to the stand-off on Friday, the streets leading to the village mosque were heavily posted with a threatening provocation ostensibly written by Coptic Church attendees that said, “We re-opened the church against your will.” Local Copts claim that Muslim instigators are the ones responsible for the signage in order to incite malice against Copts from mosque-goers and give them justification to attack the church. This type of agitation has a viral affect, notifying jihadists from nearby villages to join with another.

Rumors grew during Friday that police were prepared to arrest both Muslims and Copts on charges of sectarian strife. Because of this, Muslims made threats to Copts with warnings that Copts would be held accountable for any Muslims arrested or harmed. Meanwhile, Copts see themselves framed in the whole matter. One anonymous source directly involved said the following: “We found no support from the law, and we fear that our children will be hurt — overall, after seeing the mobilization of large numbers of jihadists in front of the mosque that faces toward our church, closing the street with prayer mats as a message of power.”

The same source close to the matter had more on Friday to say, “Copts had to agree to the reconciliation that will be held this evening in the village hall. A written agreement was presented that indicated a framework of friendliness, love and brotherhood. A reconciliation and waiver of all records between the two sides must be signed, including a ‘non-provoke crisis’ clause.”

This final item for Copts could mean permanent closure of their church building. The simple act of attending church is a provocation for jihadists and a trigger for mosques — particularly so when a mosque is in direct proximity of a church, i.e., across the road. “Conciliators” made no mention of the bolted church doors during the meeting. Many times the excuse used to rid towns of churches is a “permit issue” problem that has little or no basis in fact, which could happen next in order to have the church remain closed.

Jihadists have the final word

Bishop Makarius of Al Minya summed up the latest episode when he stated, “As we remained silent for two weeks after the closure of a church, hoping officials would stand up in the role entrusted them by the state, our silence led to a worse situation. After closing the first church, a second and third followed the same path, and a fourth one may follow soon — as if Coptic prayer is a crime and must be punished.”

Worse than ever under Al Sisi now

The Bishop’s statement continued, “What happened in two weeks didn’t occur in a year — bolted churches, people attacked and their property destroyed without deterrents by the authority.”

Coexistence comes with a price for Christians alone

The Bishop went on to say, “Copts always pay the price of this coexistence — always called for by the authorities when Copts (are attacked) pay always the price for that coexistence and not the Muslims (the attackers).”

Standard reaction by the state to aggression; Deprive Copts the right to church and prayer
Furthermore, Bishop Makarius added, “When there is any aggression, the first action taken is to close the church and pressure Copts alone without punishing the aggressors.” The Bishop concluded, “The most basic right of our rights is prayer, which is guaranteed by the constitution, and we will not stop demanding it until it is realized.”

Bishop Makarius stated, “Our fear is once the church construction law is passed along with the promises that Copts will be equally treated and are second-class citizens no more that jihadists will impose their will on the organs of the state, which we reject in total.”

List of attacks in just the last 12 days, including the story above
October 15, 2017: The church of Virgin Mary was closed in 2015 after jihadists attacked it. On this date two years later it re-opened, and while in use on the same afternoon worshipers were harassed by outsiders and police arrived to bolt the church shut – parishioners not allowed to enter again.

October 22, 2017: The church and children’s nursery of Bishop Moses in the Al Kashery village (Abu Korkas – Al Minya) where 950 Copts are parishioners was attacked by jihadists, and four Copts were injured. The church was bolted. No one was arrested but another Bedouin Reconciliation meeting was held, and the church remains closed.

October 22, 2017: Within a few hours of the Al Kashery village incident, the church of Abi Sefin at Al Karm village was closed by police wrongly claiming that local Muslims were complaining. For the record, this is the village where the seventy-year old Christian woman was stripped naked and beaten in the street in a recent attack.

Which Egypt is this — Al Sisi’s or Al Tayeb’s? Neither.

Is this evidence of the secular democratic Egypt President Al Sisi praised last week in France? (In all fairness, he did mention chaos.) Is this the religion-of-peace Islam that the Grand Imam, Al Tayeb, portrayed in his speech this month at Cairo’s “Ifta conference?”