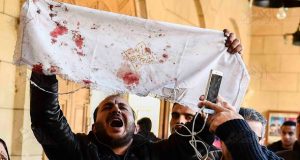 Members of the Voice of the Copts community offer sincere condolences to the Coptic families mourning today for the loss of loved ones as a result of Sunday’s (Dec 11) bombing of the Botrossia Church in Cairo that killed at least 25 people attending mass.
We grieve with our brothers and sisters and pray that those responsible for this heinous, cowardly crime will be arrested and made to stand trial. Once again, Christian Copts are made the scapegoat in an ongoing struggle between Egypt’s government and Islamic religious leaders.
A state funeral with three days of national mourning declared by the regime is appropriate. However, acts of terror and religious jihad continue to grow unchecked.
Our hearts grieve with you today as we pray for the end of your tribulations and the beginning of peace in our beloved homeland.
The presence of President Al Sisi in attendance of the victims’ funerals does not impress us anymore knowing that his compassion has not yet led him to implement the effective steps to remove Christian Copts from the crosshairs of Islamic supremacy.
We urge Egypt’s government to secure the Coptic community and every community of Egypt by ensuring that justice takes place through full investigations, arrests and trials in order to deter future acts of terror. 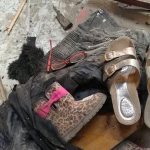 In addition to the current attack on the Botrossia Church days ago on December 11, we demand a full investigation into earlier terrorist crimes for which no suspects have yet been arrested:
– The burning and bombing destruction of 87 Coptic Christian churches in a 45-      day rampage in June and July of 2013
– The murder of 23 peaceful Christian protesters demonstrating in Maspero (Cairo) against violence in October, 2011
– The Two Saints Church bombing and killing of 87 Christians on New Year’s Eve, 2010
– The forced displacement of innocent Copts due to local government use of the Bedouin tribal arbitration system applied to Copts after unprovoked attacks upon their homes and community
Moreover, no one truly believes that rhetoric will stop terror against Christians in Egypt. The following reforms must be made:
– Remove religious teachings and examples from public school course work and textbooks.
– Remove religion courses from public schools.
– Transfer all non-religious schools to the public domain and permanently remove them from the auspices of Al Azhar Institute.
– Stop public taxpayer money from financing and supporting religious institutions.
– Reinstate the Egyptian Constitution of 1923 in totality to replace the current constitution which allows Islamic Sharia religious law to dominate the nation.
In sympathy,
Ashraf Ramelah
Voice of the Copts
Founder and president