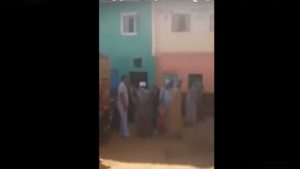 The Church of the Virgin Mary and the Martyrs of Margaregs and Abi Sefin has been harassed for years by the state and is constantly under threat of closure.

During President Al Sisi’s press conference upon his visit to France a few days ago (Saturday, Oct 21), a journalist asked about Egyptian human rights. The President replied that Egypt is suffering from disorder and chaos, adding, “I am keen to establish a modern and civil state

Meanwhile in Egypt on the same day, the government Zoning and Planning Commission paid a visit to a four-year old, owned and occupied Orthodox building containing a church for a surprise inspection. The Upper Egypt region of Egypt is primarily Christian and subject to gestapo-like scrutiny with a view to shutting down churches. The village of Al Hager in Suhag has three thousand Coptic Orthodox inhabitants with only one church a mile away – too far to walk.

The following morning before Sunday’s church service, worshipers and the priest arrived to find police forces surrounding the church building while the water and electricity were being disconnected. The reason given was that the state was concerned with security and safety due to complaints from Muslims in the town.

The Church of the Virgin Mary and the Martyrs of Margaregs and Abi Sefin has been harassed for years by the state and is constantly under threat of closure.

Church of the Virgin Mary – Its history of abuse

Beginning in 2006, the Virgin Mary Church was under construction for seven years as a four-story service and sanctuary building. The first floor was for priests only, the second floor for worship service, and the third floor dedicated to the children’s nursery. The top floor provided social services for the congregation.

Delays in construction were endless as they waited for a state church-building permit to be issued (which generally takes many years). The building was finalized and occupied before receiving it. Copts know that non-issuance of church permits is one way the state attempts to obstruct Christian worship.

Upon completion and occupancy in 2013, the Zoning Commission issued a demolition order, but fortunately the courts overturned it when Copts challenged the decision. In the middle of 2013, Copts began to hold two masses weekly on Friday and Sunday mornings.

Now, one day after Al Sisi’s declarations of civility and modernity in France, the church priest toured the property with officials from the Zoning Commission and answered their questions surmising that a shut-down was pending.

That Sunday evening, a delegation from the diocese met with the mayor for more than five hours. In the early hours of Monday morning a decision was reached to “temporarily” close the building until further determinations by the Zoning Commission. No reason given. In June of this year the church in Bani Sweef was subjected to the same closure.

It is easy for a leader to give speeches in foreign countries stating good intentions — another matter to implement them.