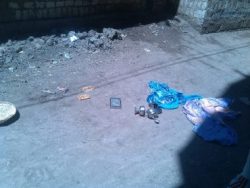 Slogan found on the entrance to the building of the Egyptian police: “Police are at the service of the people”

At 2 am on Friday, June 16 — just 20 days after the Al Minya Coptic bus attack by terrorists from Libya – Christians of Bani Sweef province (Al Minya governorate) faced flagrant degradation of law and order when local police in the small town of Saft Al Kharsa broke into the Coptic Orthodox social services center and desecrated the building. The non-operational three-story center was already shut down by the government for no reason.

Sometime before the police struck, 50 Christian families still in mourning from the Libyan terror attack were granted by the state a special security clearance for bus “victims” to temporarily reopen the building and celebrate a mass there in memory of one child and six adults lost in the gun battle. Soon after, the building reverted to its forced obsolescence.

In the early morning hours of June 16, the Egyptian police forced down the door of the vacated Coptic Orthodox 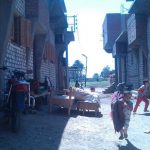 furnishings to toss in the middle of the road

social services building and ransacked the interior. Grabbing up sacred utensils, pictures, holy books, and furnishings to toss in the middle of the road, police then re-padlocked the door and placed guards before the emptied building.

That police officers initiated the crime and worked alone makes this crime a worse-than-usual one in the annals of Egypt’s church desecrations. Usually the police answer a call for “safety and security” made by Muslim vigilantes and use it as a pretense to lock the doors and shut down the church building.

Severe discriminatory restrictions created by the state make this a simple process. Laws governing church-owned buildings serve to micro-manage minutia and are meant to entrap Christians. These laws are made because a paranoia state regards church structures in general as a threat to national security. Their mere existence incites Islamic terror.

Meanwhile, office mosques and home mosques are legally built and occupied entirely without permits and opened without permits. Mosques built on purchased land require permits that are automatically issued upon request. Mosques formed in the middle of streets that block public usage for Friday noon prayers never require a permit.

According to Egypt’s constitution (Article 64, Freedom of Belief), “freedom of practicing religious ritual and establishing places of worship for the followers of revealed religions is a right organized by law.” Inequality under the law is guaranteed by Sharia.

The Saft Al Kharsa Coptic Orthodox social services center was constructed because a permit was granted. Church authorities first sought a permit to build a place of worship, but the permit request was subjected to prolonged delays – a good likelihood the permit would be denied as in so many other cases.

Brainwashed bureaucrats who execute permits shoved the Saft Al Kharsa church permit in a desk drawer. Promises from the town’s mayor and security director verbally granting immediate issuance of a church construction permit to church authorities became worthless. Fearing their land would remain idle and given their closest church ten miles away, church authorities decided to go ahead with constructing the social services facility.

Even so, in July of last year Muslims protested the completed construction and occupation of the Coptic Orthodox social services building once the cross was visible. As a result, it was officially closed by the state in the same month on July 22. Last week the local police favored their Muslim constituents by obstructing allowable Christian religious practice.

A new law based on an old decree

Under Kirby Terms of 1934 that still unofficially in use, hundreds of obstacles for Christian worship exist. As mosques sprout up like wild mushrooms in a dank forest, church construction is practically non-existent, and many in use are bolted shut by the state. About 20 percent remain in ruins.

The nearly one-year old parliamentary law, Regulation of Church Construction (80-2016), was intended to regulate religious worship of all faiths. For some time before its passage, news headlines broadcasted this intention. Then silence fell, and a new debate hit the newspapers – what about only regulating the Christians! The petty rulings guaranteed to issue from the new law regarding church permits and practices are a modern-day Omyani Decree.

The June 16 aggression by officers of the law models violence against Copts to be duplicated by other police and civilians. The police are excused and civilians are rarely arrested and tried for such crimes while the state substitutes Christian victims to pay the penalty.