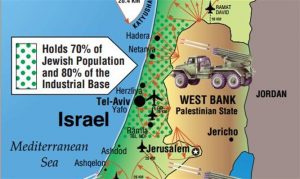 Banning US and Israel aircraft from the airspace of a Palestinian Arab state is a realistic outcome of the 2 state solution.

Imagine that, with the wave of Putin’s hand, Iran, Turkey, and Russia trilaterally “decide” that the United States is banned from all the western Syrian “safe spaces.” So with the international “legal” backing of the genocidal mas-murdering Syrian President Assad, Russia has disallowed the United States from entering the western areas of Syria. What now? Is Russia going to shoot down an American fighter jet that strays into Russia’s declared “safe areas”?

That is just the predicate example of what “airspace” really means. Applied to a Palestinian State in the so-called “West Bank”, if Israel commits self-suicide and allows the creation of a Palestine-West Bank state, what’s to stop Mahmoud Abbas, as Palestine’s future “President,” from inviting Russia, Iran, Turkey or Pakistan into its territory and declaring his airspace “off-limits” to Israeli and or American planes? Nothing.

First, if Russia has the chutzpah to declare western Syrian airspace “off-limits” to the world’s largest superpower, the United States of America, then Pakistan or Turkey or Iran either individually or in concert could and would declare a Palestinian Arab State “off-limits” to Israeli planes. Whether or not Trump promptly and properly disregards Putin’s red-line in Syria, America is a super nuclear power with thousands of nukes, Israel is Israel, and doesn’t even sit on the UN Security Council, let alone is it armed with an absolute veto-power. Would little tiny Israel risk starting a war with Pakistan, a nuclear-weapons’ state, over the “West Bank” Palestinian State’s Airspace? Somehow, I don’t think so.

Russia’s banning of the United States from Syrian air-space makes mockery out of PM Netanyahu’s 2009 Bar Ilan Two-State speech “condition” that in any Palestinian Arab State deal, Israel had to retain control of the “West Bank” Palestinian airspace.

The Israeli demand is impractical on its face. How is Israel going to give up virtually the entire “West Bank” (Judea and Samaria) land mass, and then succeed in keeping the”West Bank” airspace? It’s well-nigh ludicrous to imagine Israel’s control over Palestine’s airspace lasting more than 10 nano-seconds. And that’s assuming the Palestinian Arabs would ever agree to that condition in the first place, because any Palestinian Arab leader who agreed to allow Israel control over Palestine’s airspace would soon be a very dead leader.
What does the airspace of the “West Bank” look like? From my 1993 graphic illustrations, there are several schematic drawings of what Israel looks like without the airspace of the “West Bank”. (Figures 10 and 11 It’s pretty gruesome. Tel Aviv is essentially cut off from Ramat David to the north, and defenseless from the East.

The writer is Chairman of Americans for a Safe Israel (AFSI) and specializes in security issues, has
created an original educational 3d Topographic Map System of Israel to facilitate clear  understanding of the dangers facing Israel and its water supply. It has been studied by US