The Hajj and the struggle for Islamic leadership

The Hajj and the struggle for Islamic leadership 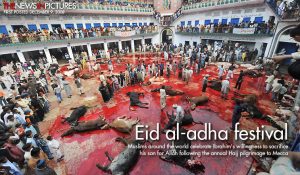 Wednesday, August 23, 2017, is the first day of Zhu–l-Hijjat, the Muslim month in which two important events take place: The pilgrimage to Mecca, one of the most central of the five Islamic commandments, and the Holiday of the Offering, Id al-Adha, with which it comes to an end.

This month is notable in the Muslim world as a result of its religious content, but also due to the political aspects that accompany that content. It is well known that in Islam there can be no separation between religion and state, between religious factors, public issues and politics.

The Hajj ceremonies in Mecca and its environs last for nine days, from the first to the ninth of the month, with each day having its own specific rituals. The tenth day marks the start of Id al-Adha, the holiday of the offering, which lasts for four days, until the 13th. The House of Saud appointed itself “guardian of the holy places” in 1925 when it took over the Hajj. It manages the Hajj with a powerful hand, making sure that all pilgrims observe the rituals in the traditional Islamic manner as interpreted by the Saudi monarchy. This fact is of great significance, because it proves that the Saudi ruler, and no one else, is the most important figure in the Islamic world.

The decision about when the month of the Hajj begins is an example of this power. The first day of each of the months making up the Islamic year is set by the Sharia court in each country, using the testimony of witnesses who see the new moon with their own eyes and testify to the court.  That naturally leads to the months and the 30 day Ramadan fast beginning on different days in various countries, because if it is cloudy and the moon cannot be seen in a specific country, the month is 30 days long, while somewhere else it might be of only 29 days duration. That is why Ramadan, which begins on the first day of the ninth Hajjidic month, does not start on the same day everywhere in the Islamic world.

In addition, there are cities, such as Bagdad, where there are both Sunni and Shiite residents with separate courts. Sometimes the Sunnis begin a new month while it is the last day of the previous month for the Shiites living in the same city and sometimes it is the other way around due to the different decisions of their separate courts. This is most conspicuous during Ramadan, when one sect begins to fast while the other is still eating; then at the end of the month when the Eid al Fitr holiday begins, the first group celebrates with food and drink while the second is still fasting.

The month of Hajj differs from other months because the entire Islamic world takes part in the pilgrimage and has to accept the Saudi calendar in order to participate in the date-dependent ceremonies. This includes the Shiites, who refuse to recognize Sunni hegemony over holy Islamic sites, but have no choice but to accept Saudi dictation. The Saudis take advantage of their power and stress the unity of Islam achieved during the period of their control. There were years when the Shiites, mainly Iranians, refused to accept Saudi rule and carried out rituals foreign to Sunni tradition, leading to riots and the death of a large number of pilgrims.

The rising tensions between Iran and Saudi Arabia as a result of their major conflicts over Syria, Yemen, Iraq and Lebanon, caused Iran’s Supreme Leader, Ayatollah ali Khamenei to fear a bloodbath at the Hajj of 2016. He accordingly moved the pilgrimage site to Karbala, Iraq, where in 680 C.E. Mohammed’s grandson Hussein ben Ali was beheaded by the Sunni Caliph Yazid ben Mu’awiya’s army. One million Iranian pilgrims arrived in Karbala and celebrated the holiday in memory of  Hussein ben Ali.

Sunni elders, including Egyptian Sheikh Alazar publicized opinions criticizing the Iranian move, accusing Khameini of deepening the schism in Islam. Other Sunnis, mostly Saudi, said that Shiites followed the devil, not Allah, in moving the Hajj from Mecca.

The import of this remark is that it implies that the Shiites are not part of Islam and their blood can be spilled with impunity  Last year’s dispute poured oil on the fire of inter-Islamic hate and on the wars between Saudi Arabia, representing the Sunnis, and Iran, representing the Shiites.

What can we look forward to this year when the Hajj to Mecca approaches?  I do not know, but I will not be surprised if the political tension between the Saudis and Iran, particularly after the Sunni ISIS defeats, Shiite Hezbollah victories and Iran’s moving into Iraq, Syria and Lebanon, finds an outlet during the Hajj. It could be in the form of a Shiite boycott of Mecca or Saudi violence against any Shiites who attempt the pilgrimage to Mecca.

In June, Jerusalem became the site of the struggle (“Ribat”) between Islam, the religion that expects to take the place of Judaism and Christianity, and Judaism, which is in the midst of a return to its former status as a living, worthy religion. The background of the struggle is the renewal of Jewish sovereignty on the Temple Mount. During the short period of Muslim demonstrations for the right to enter the Al Aqsa Mosque without “Jewish” security checks, Saudi Arabia’s voice was conspicuously absent.

The reason for the Saudi silence was the fear that the Muslim Brotherhood and those over whom they hold sway would raise the Al Aqsa Mosque to a level of importance that  could contest the centrality of Mecca in Islam.

This plan was heard in Muslim Brotherhood media pronouncements. In 2012, for example, Safwat Higazi, the Muslim Brotherhood’s chief spokesman in Egypt, said that the capital of the Islamic Caliphate that can unite all the Arab nations “is not Mecca, not Medina, not Cairo, but Jerusalem.

A similar pronouncement was made in 2014, at a demonstration in Jerusalem, by Kamal Khatib, Deputy head of the Northern Branch of the Islamic Movement in Israel, headed by Sheikh Raad Salah,

Sheikh Raad Salah himself declared that he intends to bring water from the Zamzam spring in Mecca to pour into the cistern on the Temple Mount in order to sanctify the Al Aqsa Mosque with the holiness of Mecca. The Saudis see this as unacceptable competition and did not permit Salah to attend the Hajj in Mecca. Jerusalem’s challenge to Mecca is also evident in the boycott the Saudis declared on Qatar, a country which publicly supports the Muslim Brotherhood’s offshoots, such as Hamas, for whom the struggle for Jerusalem and Falestin – which they call Aknaf Bayt al-Maqdis – the sectors of Jerusalem – is the raison d’etre.

Qatar has even set aside half a billion dollars for the purpose of removing Jerusalem from within Israel’s boundaries.  It is using them to buy the media, political figures and organizations like UNESCO

Turkey’s Erdogan is playing a role in the struggle for Islamic hegemony by working ceaselessly to strengthen his status as the all-powerful Sultan bringing Turkey back to its status prior to WWI.  Erdogan’s hegemonic aspirations clash with the Saudis on points of Muslim memory, because they know full well that for 400 years, Turkey ruled the Hijaz, the territory that included Mecca and Medina, until defeated by the Christian heretics – that is, the British. The victors promptly handed over Islam’s holy land, the Hijaz (Iraq and historic Palestine which includes today’s Jordan) to the Arab friends who had cooperated with them, stabbing the Turks in the back. Today, unsurprisingly, Erdogan supports Qatar, the country the Saudis are trying to bring to its knees.

Saudi sensitivity to the Hijaz stems from the fact that the ruling Al-Saud family is not originally from the part of the Hijaz in the western Arabian peninsula,  but from the centrally located Najd Heights.  The fact that they conquered the area in 1925 from the Sharif’s Notables who claim to be direct descendants of Mohammed, casts a shadow on the Saud family’s legitimacy. This is the reason the Saudi king calls himself “Protector of the holy sites,” intending for that title to grant him “kosher” Islamic status. However, many people in the Sunni world do not buy that and do not entirely accept the Saud family’s right to rule and force their Wahabee Islamic traditions to be the norm at sites that are holy to all Muslims.

The Sauds invest large sums of money to maintain the sites so as to gain legitimacy for ruling over Mecca and Medina, building roads, bridges, railways and amenities that make it easier for the two million Muslims whose annual pilgrimages they allow, to be comfortable and secure. Saudi Arabia imports hundreds of thousands of sheep, mainly from Australia, handing them out to the pilgrims for the holiday celebrated on the tenth of the Hajj month.

Next month, the Hajj is likely to bring the tensions over Islamic hegemony to a boil, when the internal Islamic rifts described above threaten to destabilize the present situation during the Hajj and due to the Hajj: The ethnic Sunni-Shiite rift parallels the Saudi-Iranian political rift, the Wahabee-Muslim Brotherhood ideological rift, and the historic rift between Turkey and Saudi Arabia.

Hopefully, these deep differences will not lead once again to dead and wounded pilgrims, most of whom come only in order to be close to Allah, keep the fundamental commandments connected to the Hajj and obtain forgiveness for their transgressions. They are not interested in all the ethnic, political, ideological and historical considerations involved; all they desire is to come closer to the heavens, keep Allah’s commandments and do Allah’s will.

I wish the pilgrims to Mecca: Haj mabroor wa-saiy mashkoor wa-dhanb maghfoor – a pure holiday, hearts full of gratitude and forgiven sins. May they return safely to their homes.

Dr. Mordechai Kedar
Dr. Mordechai Kedar is a senior lecturer in the Department of Arabic at Bar-Ilan University. He served in IDF Military Intelligence for 25 years, specializing in Arab political discourse, Arab mass media, Islamic groups and the Syrian domestic arena. Thoroughly familiar with Arab media in real time, he is frequently interviewed on the various news programs in Israel.