Egypt’s election: All votes will go to Al-Sisi

Egypt’s election: All votes will go to Al-Sisi 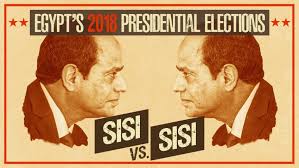 Low turn-out at the polls would bring embarrassment to the president, so every effort is being made to get people out to vote

BY: Dr. Ashraf Ramelah – Voice of the Copts

Egypt is holding its presidential election now through March 28. President Abdul Fatah Al-Sisi is running for re-election after four years of his first term. There is one opposing candidate from the Tomorrow Party who has vowed to cast his vote for the president and encourages all Egyptians to do the same.

The ballots will be counted by the Election Commission as usual with the political parties in observance. The president is an independent candidate of the military without a political party. However, the military will be absent from the process because constitutionally it cannot be a part of civilian elections.

With the outcome already determined, Egyptians view the election as a comedic performance mainly because it is too painful to take seriously. Any real opposition candidates to the president have been orchestrated out of the process by the Al-Sisi government in the past months. (See my article entitled: Egypt: Al-Sisi’s pre-election maneuvers guarantee his March victory).

State-sponsored media rave about the popularity of Al-Sisi and show pictures of Egyptians endorsing him with his campaign slogan of “build it.” But certain facts belie such reports. For instance, the media is pressuring the electorate to go out and vote by stressing it as the sacred duty of every citizen. Guilt infliction would not be necessary if a highly popular, reformist incumbent were running.

Christian clergy and Muslim Imams are threatening the populace with the fate of hell for those who do not go to the voting polls while the courts threaten non-voters with monetary fines. State employees are told by their managers that they will receive punishments for misconduct if they are absent from the performance of their electoral duty.

Meanwhile, Orthodox churches in the Egyptian diaspora around the world are arranging buses to haul church-goers to offices of the Egyptian Consulate to cast their vote for Al-Sisi. This follows the directive of Pope Tawadros II, an advocate of the president, when last week he announced plainly that, “It is the obligation and duty of every person to vote.” Low turn-out at the polls would bring embarrassment to the president and must be avoided at all cost.

Complacency is being combated by the state, church and mosque, but the anger boiling underneath the surface of the ersatz conformity is an even bigger threat to Al-Sisi and can’t be dealt with as easily by the regime whose appearance must remain “democratic.” Calling the election a farce, the Civil Democratic Movement has risen up to boycott it. Analysts are citing it as the object of the president’s anger and the reason for the regime’s pressure upon voters across the country.

Anger in general toward Al-Sisi’s failed record is what led the regime in the first place to eliminate risk by clearing the ballot of opposition. The other candidates presumably represented forces so insidious to the country and the welfare of the citizenry that Al-Sisi waited until they threatened his position as president to deal with their lurking presence.

Moreover, his failure to float ideas to fix the country’s infrastructure problems, inflation and poverty has been accompanied by a rise in police state tactics such as “aurora” visits to contrarians and jail for speaking freely and critically. Considering this in the light of the president’s promises of democratic reforms and talk of human rights, Egyptians are left with cognitive dissonance. Orthodox Copts have solved this problem by accepting Al-Sisi as a ruler who “means well” in light of terror atrocities, brute police force, rigged courts and rubble in place of churches. Political relativism helps this along.

Are the Copts correct in agreeing with Al-Sisi that any other option rising in the political arena would be much too risky and threatening to Egypt’s long history of military rule? Military rule is all Egyptians know. Another military man as president would be pointless and, if less endearing, might prove disruptive to the stability of a people who need to manage daily life under massive corruption and civil decay.