Abbas is going to defy Trump and Netanyahu at the UN

Abbas is going to defy Trump and Netanyahu at the UN 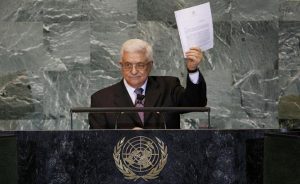 The UN is the theater of the absurd and Abbas will take advantage of that.

PLO chairman Mahmoud Abbas seems set to once again embark on another futile journey to the United Nations (UN) seeking recognition of a second Arab state – in addition to Jordan – within the territory comprised in the League of Nations Mandate for Palestine.

A senior unidentified Palestinian source threatened such action on 21 August:

“If we don’t hear within a month and a half that the American team has stopped talking and started doing, Abbas intends to mobilize anyone and everyone he can for the UN General Assembly session on the establishment of a Palestinian state, regardless of the Israeli and American reactions,”

President Trump was quick to respond – State Department Spokesperson Heather Nauert telling a press briefing on 23 August in answer to a question as to why America was loath to commit – or recommit – to the two-state solution:

“We are not going to state what the outcome has to be. It has to be workable to both sides. And I think, really, that’s the best view as to not really bias one side over the other, to make sure that they can work through it. It’s been many, many decades, as you well know, that the parties have not been able to come to any kind of good agreement and sustainable solution to this. So we leave it up to them to be able to work that through.”

Negotiations – suspended since April 2014 – extending over the past 24 years between Israel and the PLO have not produced any workable and sustainable solution.  Abbas is clearly in no mood to resume those negotiations without preconditions.

A replay of Abbas’s appearance at the UN General Assembly on 23 September 2011 therefore seems inevitable.

Israel’s Prime Minister – Benjamin Netanyahu – was quick to  point out at that time how automatic majorities at the UN had been used to incite institutionalised hatred against Israel.

“After all, it was here in 1975 that the age-old yearning of my people to restore our national life in our ancient biblical homeland — it was then that this was braided — branded, rather — shamefully, as racism. And it was here in 1980, right here, that the historic peace agreement between Israel and Egypt wasn’t praised; it was denounced! And it’s here year after year that Israel is unjustly singled out for condemnation. It’s singled out for condemnation more often than all the nations of the world combined. Twenty-one out of the 27 General Assembly resolutions condemn Israel — the one true democracy in the Middle East.”

Well, this is an unfortunate part of the UN institution. It’s the — the theatre of the absurd. It is not only that it casts Israel as the villain; it often casts real villains in leading roles: Gadhafi’s Libya  chaired the UN Commission on Human Rights; Saddam’s Iraq headed the UN Committee on Disarmament.

You might say: That’s the past. Well, here’s what’s happening now — right now, today. Hezbollah-controlled Lebanon presides over the UN Security Council. This means, in effect, that a terror organisation presides over the body entrusted with guaranteeing the world’s security.

You couldn’t make this thing up.

So here in the UN, automatic majorities can decide anything. They can decide that the sun sets in the west or rises in the west. I think the first has already been pre-ordained. But they can also   decide — they have decided that the Western Wall in Jerusalem, Judaism’s holiest place, is occupied Palestinian territory.”

This theatre of the absurd seems set to be repeated once again at the forthcoming 72nd Session of the UN General Assembly.

But Israel-bashing can never resolve the 100 years old Jewish-Arab conflict. Perhaps they don’t want to resolve it.

David Singer
David Singer is an Australian lawyer who is active in Zionist community organizations in that country. He founded the “Jordan is Palestine” Committee in 1979.