Zarif: We can withdraw from nuclear deal if the U.S. does

Zarif: We can withdraw from nuclear deal if the U.S. does 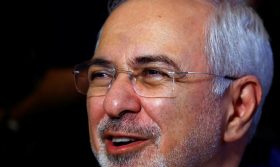 Iranian Foreign Minister says Iran may abandon the nuclear deal if the United States decides to withdraw from it.
By Elad Benari – Arutz Sheva

Iranian Foreign Minister Mohammad Javad Zarif declared on Thursday that Iran may abandon the nuclear deal it reached with six major powers if the United States decides to withdraw from it.

“If Washington decides to pull out of the deal, Iran has the option of withdrawal and other options,” Zarif told Al-Jazeera TV, as quoted by Reuters.

“Washington will be in a better position if it remains committed to the deal,” the network quoted Zarif as saying.

Al-Jazeera had deleted an earlier tweet citing Zarif as saying that if Washington withdrew from the deal Iran would do so too, rather than just having the option to do so, after an Iranian official said Zarif had been misquoted.

U.S. President Donald trump has long been a vocal critic of the Iranian nuclear deal, and he repeated his criticism of the deal in his speech at the UN General Assembly last week.

Trump called the deal “an embarrassment” to the U.S. and “one of worst and most one-sided transactions the United States has ever entered into.”

Trump is due to update Congress by October 15 whether Iran is in compliance with the nuclear deal.

While he recently confirmed that Iran is adhering to the nuclear agreement, he and other officials in the administration stressed that the President still has reservations about the deal.

Zarif has several times in the last few weeks criticized Trump over his statements on the deal.

Earlier this week, he blasted the United States and called it “unreliable”.

“What the United States is doing, in addition to being unpredictable—which might sometimes work—is proving that it is unreliable,” Zarif told CNN.

On Wednesday, he again scolded Trump, this time over a weekend tweet about an Iranian missile launch which officials later said was fake.

“We need to check our facts before we make statements,” Zarif told The Associated Press. “It worries me that people play with facts and produce alternative facts.”

On Thursday, a State Department official said Washington would not comment on every statement by an Iranian official.

“We are fully committed to addressing the totality of Iranian threats and malign activities,” the official said, according to Reuters.