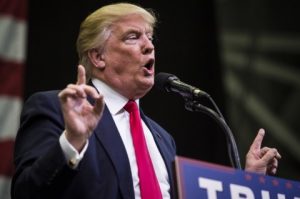 President Donald Trump made his first public address abroad since taking office on January 20th,
speaking Sunday in Riyadh, Saudi Arabia to condemn radical Islamic terror and call for a united front in
the region against terrorism.

The president called the war on terrorism a struggle against “barbaric criminals”, and criticized his
predecessor, President Obama, and others for not acknowledging the threat posed specifically by radical
Islam.

“That means honestly confronting the crisis of Islamic extremism and the Islamists and Islamic terror of
all kinds,” President Trump added.

The president, who landed in Saudi Arabia on Saturday – the first stop in a five-state trip – addressed the
Muslim world, calling for the “foot soldiers of evil” to be driven out of Islam.

During his speech, the president singled out the Hamas and Hezbollah terror organizations, listing them
alongside ISIS and Al-Qaeda as the greatest purveyors of terrorism.

Some estimates say that more than 95% of the victims of terrorism, are themselves Muslims. It is a
tragedy of epic proportions. No description of the suffering can begin to capture its full measure. ISIS,
Al-Qaida, Hezbollah, Hamas – it must be counted not just in the number of dead, but in generations of
vanished dreams.”

The terrorists, Trump continued “do not worship God, they worship death. If we do not act against this
organized terror, we know what will be the end result.”

A spokesman for the Hamas terror group slammed Trump after the speech, accusing him of a pro-Israel
bias.

“The statement describing Hamas as a terror group is rejected and is a distortion of our image and
shows a complete bias to the Zionist occupation,” Hamas spokesman Fawzi Barhoum said.