Syrian convicted of terror in Germany

Syrian convicted of terror in Germany 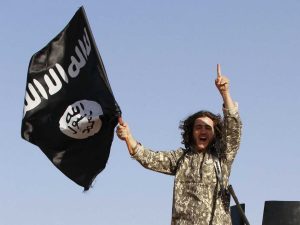 Syrian member of ISIS convicted in Germany of membership in a terrorist organization.

A Syrian man was convicted in Germany on Friday of membership in a terrorist organization after he
served in the Islamic State (ISIS) group in his homeland and later helped plan an attack in Berlin that was
never carried out.

According to The Associated Press, 20-year-old Shaas al-Mohammad was sentenced under youth
guidelines to five years in prison.

During his Berlin criminal court trial, prosecutors said al-Mohammad joined ISIS as a teenager in Syria in
2013 before seeking asylum in Germany two years later.

The court found that once in Berlin, he passed information about “soft targets” in the German capital to
the group in apparent preparation for an attack.

Al-Mohammad had denied the charges and can appeal, according to AP.

The trial comes as Germany remains under a high-threat terrorist alert following a series of attacks
which hit the country in the past year.

In the first attack, a 17-year-old Afghani with an axe attacked passengers on a train in Wurzburg before
being shot dead by security forces.

In the second incident, an attacker set off a bomb in a restaurant in Ansbach, killing himself and
wounding 12 others.
Most recently, terrorist Anis Amri drove a truck into a Christmas market in Berlin, killing 12 people and
injuring 48. ISIS later claimed responsibility for the attack.