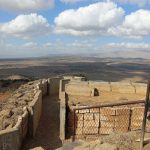 Syrian army warns Israel against further airstrikes on targets on the Syrian side of the Golan Heights.

The Syrian army on Sunday warned Israel against “repercussions” if it continues to launch airstrikes on targets on the Syrian side of the Golan Heights.

The warning came in response to Israel’s attack against Syrian government targets on Saturday, after a number of mortar shells from Syria landed in the Golan Heights.

In a statement that was carried by the Syrian news agency SANA, the army said Israel’s airstrike was a “desperate attempt” to support terrorist groups.

The Syrian government refers to all rebel groups fighting the Bashar Al-Assad regime as “terrorists”.

The Syrian army’s General Command warned against the risks posed by such hostile acts and said it “holds the Israeli enemy responsible for the serious repercussions if such acts reoccur under any pretext, affirming determination to crush terrorist groups which are the Israeli enemy’s proxy in the area.”

Saturday’s incident was followed by yet more mortar fire from Syria on Sunday. The IDF said the incident was believed to have been stray fire and not part of a deliberate attack on Israel.

Israel also retaliated for Sunday’s incident, striking two Syrian artillery pieces and an ammunition truck on the Syrian side of the northern Golan Heights.

The IDF spokesperson emphasized that Israel is not “a party to or involved in the Syrian civil war,” but added that the IDF “takes seriously any attempt to harm the sovereignty of the State of Israel or the security of its citizens, and views the Syrian army as being responsible for occurs in [Syria’s] territory”.