PA to Trump: We must have an airport, Dead Sea resort

PA to Trump: We must have an airport, Dead Sea resort 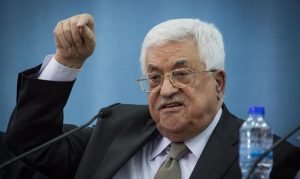 The Palestinian Authority is demanding a number of infrastructure improvements, including an airport in
PA-controlled territory in Samaria, the construction of a new power distribution facility in northern
Samaria, a new cement factory, and a hotel resort on the Dead Sea.

In March, Palestinian Authority chairman Mahmoud Abbas met with President Trump in the White House,
laying the groundwork for the President’s plan to reboot negotiations between Israel and the PA.

According to White House Press Secretary Sean Spicer, the two discussed a variety of policy questions,
including “measures to empower the Palestinian economy and provide economic opportunity for the
Palestinian people.”

During the discussion on the Palestinian Authority’s economy, the PA delegation headed by Abbas
submitted a list of infrastructure projects the PA claims are necessary for its economic development and
the establishment of peaceful relations with Israel, Walla News reported.

Among the items demanded by the PA delegation are the construction of an airport inside the Palestinian
Authority for use by Arab residents of Judea and Samaria, a new power station in northern Samaria, a
cement factory in Bethlehem, and control of part of the Dead Sea area and establishment of a hotel resort
on the beach.

A senior PA official told Walla News that no specific plans had been drawn up for the airport’s
construction, but that the PA would be willing to negotiate with Israel over its location.

“We don’t have a specific place for this plan. Wherever it’s agreed upon, we’re ready to build the airport
there.”

Since the beginning of the Second Intifada in 2000, Israel has barred the Palestinian Authority from
independently operating airports, shutting down the Gaza International Airport in October 2000 and
nixing proposals for joint control over Atarot Airport in Jerusalem.