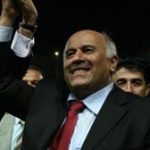 Palestinian Football Association chief Jibril Rajoub on Sunday called on Barcelona star Lionel Messi not to play in an Argentina-Israel game in Jerusalem, urging fans to burn their shirts if he does, AFP reported.

Speaking at a news conference in Ramallah, Rajoub told journalists he had written to Argentina’s government asking that Messi not take part in a June 9 friendly against Israel.

“This match has become a political tool,” he said in Arabic, adding, “The Israeli government is trying to give it political significance by insisting it be held in Jerusalem.”

The organizers of the June 9 game announced several weeks ago that the that the game would be played in Jerusalem’s Teddy Stadium instead of at the Sammy Ofer Stadium in Haifa, despite the fact that it can hold more fans.

“Messi is a symbol of peace and love,” Rajoub said Sunday, according to AFP. “We ask him not to participate in laundering the crimes of the occupation.”

Messi, he added, “has tens of millions of fans in the Arab and Muslim countries… we ask everyone to burn their shirts which bear his name and posters (with his image).”

Rajoub, along with several anti-Israel organizations, has long attempted to force soccer governing body FIFA to ban six Israeli teams based in Judea and Samaria. He claims that their presence there is in breach of FIFA statutes, which forbids another member association playing on another territory without permission.

Last October, FIFA President Gianni Infantino announced his organization would not intervene in the issue and that it considers the matter closed.

Rajoub later accused FIFA of caving to Israeli pressure, saying Infantino “did not deal appropriately” with his complaints against Israel.

Contacted by AFP following Rajoub’s comments, Israel’s sports ministry had no immediate response and the Israel Football Association spokesperson could not be reached.

Rajoub, despite being a member of Fatah which is often touted as a peace partner of Israel’s, is notorious for his anti-Israel actions.

He has in the past said that Jews deserved the genocide inflicted on them by the Nazis. Prior to that he declared that if the PA had a nuclear bomb, it would use it against Israel.

Earlier this year, Rajoub was filmed as he verbally confronted Border Police officers at the Cave of the Patriarchs in Hevron, telling one of them to “shut up, go to hell.”