PA blames Hamas for the situation in Gaza

PA blames Hamas for the situation in Gaza 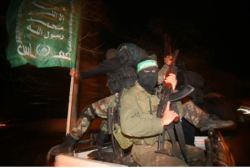 PA government, fearing repercussions of the demonstrations against it, blames Hamas for the difficult situation in Gaza.

The Palestinian Authority government is troubled by recent demonstrations in Ramallah in which protesters demanded that the economic punitive measures against Hamas-controlled Gaza be lifted.

In an official announcement issued at the end of its weekly meeting on Tuesday, the PA government stated that it was committed to freedom of expression, while calling to focus on unity and the supreme national interest and to oppose the campaign of incitement, slander and distortion of facts that harm national security and expose the Palestinian national enterprise to danger.

The PA’s aggressive message is directly aimed at Hamas, whose leaders openly encourage the demonstrations in Judea and Samaria against the PA government.

Hamas and PA chairman Mahmoud Abbas’ Fatah faction have been at odds since that 2007 coup and all attempts at reconciliation have failed to bear fruit.

The sides signed a reconciliation agreement in October, as part of which Hamas was to transfer power in Gaza by December 1. That deadline was initially put back by 10 days and then appeared to have been cancelled altogether after it reportedly hit “obstacles”.

Hamas recently denounced the PA cabinet led by Rami Hamdallah over its policy of “deceiving, creating tension and deliberately neglecting the needs of the residents of the Gaza Strip.”