It’s not Ramallah, it’s the USA

It’s not Ramallah, it’s the USA 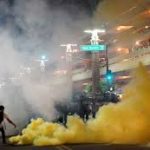 US police were forced to use tear gas against violent leftist protesters demonstrating outside a Phoenix, Arizona, event at which US President Donald Trump spoke.

According to CNN, the event was “chaotic,” with protesters throwing water bottles and rocks at police officers, who responded with pepper spray, stun grenades, tear gas, and smoke grenades.

In his 75-minute speech, Trump spoke about the protests and said only a few protesters were violent. However, journalists said there were thousands of violent protesters.

Trump also attacked the media, saying journalists took his response to the Charlottesville violence out of context, in order to make him seem racist. According to Trump, journalists are “liars” and “sick people” who create “division” in the country. He also emphasized that he hadexplicitly condemned KKK and neo-Nazi groups in his speeches – but that the media insists on blaming him for comparing white racists to leftist rioters.

Trump pointed to the television cameras covering the event and noted that the red “live broadcast” lights went off as soon as he started criticizing the media.