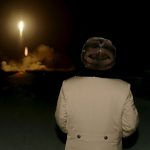 North Korea test fires what appears to be an intercontinental ballistic missile.

The latest test just hours after the U.S. and Japan moved to step up sanctions against Pyongyang following its first ICBM test earlier this month.

South Korean, U.S. and Japanese monitors all detected the test, with Japanese Prime Minister Shinzo Abe saying the missile may have landed within Japan’s maritime exclusive economic zone, according to AFP.

“We assess that this missile was an intercontinental ballistic missile,” Pentagon spokesman Navy Captain Jeff Davis was quoted as having said, adding that the rocket travelled about 1,000 kilometers before splashing down in the Sea of Japan.

The launch came a day after North Korea celebrated what it calls “Victory Day”, the anniversary of the end of the 1950-53 Korean War. Pyongyang regularly times its missile tests to coincide with symbolic dates.

The bill, which also sanctions Russia and Iran, bars ships owned by the country or by countries that refuse to comply with UN resolutions against Pyongyang from operating in American waters or docking at U.S. ports. Goods produced by North Korea’s forced labor would be prohibited from entering the United States.

U.S. military and South Korean intelligence officials had in recent days warned that North Korea appeared to be prepping for another missile test — likely of an ICBM.

The ICBM test on July 4 had triggered global alarm, with experts saying the missile had a theoretical range that could reach Alaska.

While North Korea had declared in the past that it could test-launch an ICBM “at any time” from any location set by its leader, Kim Jong-Un, it was impossible to determine whether any of its tests had been of an ICBM until the July 4 test.

Since North Korea’s leader, Kim Jong Un, came to power there have been advances in his country’s nuclear weapons drive, including three nuclear tests and multiple rocket launches.

Reacting to Friday’s launch, UN spokesman Farhan Haq said it was “frustrating” that the Secretary General’s calls for all sides to de-escalate tensions on the Korean peninsula had gone unheeded.

U.S. ambassador to the UN Nikki Haley also warned that the U.S. is prepared to defend itself from the North Korean threat, saying, “One of our capabilities lies with our considerable military forces. We will use them if we must, but we prefer not to have to go in that direction.”