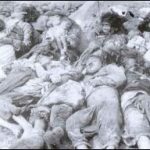 Prime Minister Binyamin Netanyahu has ordered the Ministerial Committee on Legislation to remove from its agenda two bills calling to recognize the Armenian genocide, Hadashot TVreported on Saturday.

The Knesset recently approved a motionsubmitted by Meretz chairwoman MK Tamar Zandberg to hold a plenary debate on “recognizing the Armenian genocide”.

According Saturday’s report, two bills on the issue were submitted by MKs Amir Ohana (Likud) and Itzik Shmuli (Zionist Union) in the wake of the recent crisis in relations with Turkey. However, the initiatives will be shelved after Netanyahu asked that the the campaign against the Turks not be escalated.

Armenians have long sought international recognition for the 1915-1917 killings in the Ottoman era as genocide, which they say left some 1.5 million of their people dead.

Turkey — the Ottoman Empire’s successor state — strongly rejects that the massacres, imprisonment and forced deportation of Armenians from 1915 amounted to a genocide.

The bills were submitted amid rising tensions between Turkey and Israel in the wake of the violent riots along the Gaza border.

Turkish president Recep Tayyip Erdogan has upped his anti-Israel rhetoric in recent weeks following the deaths of Gazans in the riots.

Erdogan accused Prime Minister Binyamin Netanyahu of having blood on his hands.

“Netanyahu is the PM of an apartheid state that has occupied a defenseless people’s lands for 60+ yrs in violation of UN resolutions. He has the blood of Palestinians on his hands and can’t cover up crimes by attacking Turkey,” Erdogan tweeted.

Netanyahu later fired back, saying, “A man who sends thousands of Turkish soldiers to hold the occupation of northern Cyprus and invades Syria will not preach to us when we defend ourselves from an attempted infiltration by Hamas.”

“A man whose hands are stained with the blood of countless Kurdish citizens in Turkey and Syria is the last one who can preach to us about combat ethics,” Netanyahu added.

Erdogan later insisted that Hamas is not a terrorist organization.

“Reminder to Netanyahu: Hamas is not a terrorist organization and Palestinians are not terrorists. It is a resistance movement that defends the Palestinian homeland against an occupying power. The world stands in solidarity with the people of Palestine against their oppressors,” he tweeted.

Responding to Saturday’s report that the legislation will be shelved, Shmuli said, “Netanyahu and his ministers make declarations like lions but fall like flies every time Erdogan threatens. A day on which the prime minister of the Jewish state agrees to be an active partner in denying a genocide of another people that were massacred in concentration camps and death marches is a dark day and a deep moral stain on all of us.”

“What would we say if the world refused to recognize the Holocaust because of diplomatic discomfort and economic interests? If we share the denial of tragedies in history, we can never prevent those that may come in the future. I call on the government to leave political considerations aside and make the necessary historical justice,” added Shmuli.

“If the government is afraid to bring up the law, then we will bring it for a vote as soon as possible. I call on all the members of the coalition who have made it clear that it is time to recognize the Armenian genocide to pass the law together with us,” added Lapid.