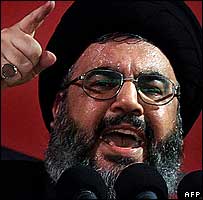 Hezbollah leader claims referendum on Kurdish independence was a U.S.-Israeli plot to carve up the region.

The recent referendum on Kurdish independence was a “plot” by the United States and Israel, Hezbollah leader Hassan Nasrallah claimed Saturday, according to Reuters.

Nasrallah warned that that the vote marked a first step toward the partition of the Middle East, warning that this would lead to “internal wars” and must be opposed.

Noting that Israel had come out in support of Kurdish statehood, the Hezbollah leader described the referendum as part of a U.S.-Israeli plot to carve up the region.

The United States came out in opposition to the vote, along with major European states and neighboring countries Turkey and Iran. The government of Syria, where Kurdish groups have established autonomous regions, also opposed the referendum.

Nasrallah has previously claimed that the U.S. and Israel were responsible for the creation of the Islamic State (ISIS).

In August, he mocked Prime Minister Binyamin Netanyahu and claimed that he is “crying” over the downfall of ISIS in Syria and Iraq.

“The ones who are crying today about the surrender of ISIS in Syria and Iraq are Netanyahu and the senior Israeli officials,” Nasrallah said, claiming, “ISIS was supposed to destroy our region, our army and our institutions, and give them to the United States and Israel.”

His comments about the U.S. and Israel being behind the Kurdish referendum came hours after Turkish President Recep Tayyip Erdogan blamed the Israeli Mossad for the Kurds’ decision to become independent.

According to Erdogan, the fact that the Kurds flew Israeli flags during their celebrations is proof of Israeli involvement.

Speaking to Iraqi Kurds, the Turkish President added, “Do you even understand what you have done? Only Israel will support you.”

Last week, Erdogan threatened to halt the normalization of Turkey’s ties with Israel, if Israel continued to support the Kurds’ bid for independence.