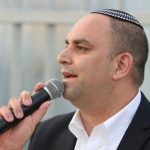 Footage from a confrontation between Lod Mayor Yair Revivo and worshippers at a Lod mosque early Friday morning has surfaced, showing the moments before Revivo was attacked by worshippers as he attempted to enforce a police order barring the use of loudspeakers in the middle of the night.

The incident occurred during the pre-dawn Eid al-Adha “Sacrifice Feast” at a Lod mosque which refused to comply with orders from both police and the municipality that noise laws, which ban the use of loudspeakers after 11:00 p.m., be adhered to.

When one mosque began blasting out prayers via its loudspeaker system in the middle of the night, Revivo made his way to the mosque to ensure that the system was disconnected.

During the subsequent confrontation with the mosque’s imam and worshippers, Revivo was physically assaulted and lost his phone to his assailants, while police officers present at the scene refused to intervene.