Jordan’s King: We must address the challenges in a new way

Jordan’s King: We must address the challenges in a new way 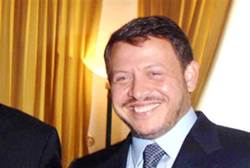 Hours after dismissing his Prime Minister, Jordan’s King Abdullah II discusses the crisis in the kingdom.

Jordan’s King Abdullah II on Monday evening discussed the political crisis in the kingdom, saying, “We must address the challenges in a new way: Either we allow our people to live in dignity or we will enter the unknown.”

The king’s comments in a conversation with journalists, quoted by Hadashot TV, came after he replaced his Prime Minister Hani Mulki amid widespread anger over economic policies that sparked the largest protests in the kingdom in several years.

In a somewhat surprising move, King Abdullah welcomed the protests and said, “What I saw in recent days brings me happiness and pride in being a Jordanian.”

He described the changes he would like to see in the new government and said that “the state’s institutions must adopt a working style that will focus on improving their functioning, accountability and transparency. As well, young people who have the strength and dedication to serve the state must be given an opportunity.”

“The challenges ahead and the difficult situation Jordan is facing must be confronted wisely and responsibly,” continued the king, adding, “If we, as Jordanians, want to move forward, we must address the challenges in a new way, which is not the traditional way.”

Jordan, he said, is “at a crossroads – either we will emerge from the crisis and provide a life of dignity to our people or we will enter, God forbid, into the unknown. But, we have to know where we’re going.”

Mulki was dismissed as Prime Minister following a series of protests against IMF-backed tax increases. He had imposed steep IMF-mandated tax hikes early this year to cut rising public debt. The increases have hit the incomes of ordinary Jordanians, causing his popularity to plummet.

In his letter accepting the resignation, the monarch praised Mulki for his “bravery in taking difficult decisions that do not gain popularity” and asked him to stay on in a caretaker role until the new government is formed, reported Reuters.

Mulki was named by the King as Prime Minister in May of 2016, after Abdullah dissolved the country’s parliament.

Jordan’s economy has deteriorated in recent years for several reasons, including the conduct of recent governments and the kingdom’s intake of over a million Syrian refugees.