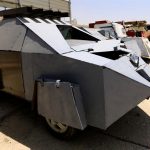 The Iraqi army has displayed a series of captured armored car bomb vehicles used by ISIS against military bases in Iraq.

The car bombs were built to reach their targets and explode upon reaching them. The car bombs include a car on which a tank turret and heavy armour had been assembled.

The presentation is on view in the the major Iraqi city of Mosul, an ISIS stronghold recently conquered by the Iraqi army after an 18-month battle.