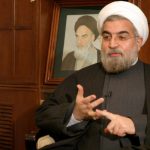 Iranian President Hassan Rouhani blasted plans by the United States to impose new sanctions on the Tehran regime, declaring on Tuesday that the Islamic Republic would withdraw from the treaty “within hours” of any new sanctions being put into effect, Reuters reported.

“If America wants to go back to the experience [of sanctions], Iran would certainly return in a short time — not a week or a month but within hours — to conditions more advanced than before the start of negotiations,” Rouhani said during a live broadcast on Iranian state television.

“Iran could quit the nuclear deal within hours if the US imposes more sanctions,” Rouhani said, according to Iran’s state-run Press TV.

Earlier this month, President Trump signed a new package of sanctions into law, with sanctions targeting not only Iran, but North Korea and the Russian government as well.

Within hours, Iran’s Foreign Ministry condemned the new sanctions and vowed an “appropriate and proportional response”.

“In our view the nuclear deal has been violated and we will show an appropriate and proportional reaction to this issue,” Araqchi was quoted by Reuters as said in an interview with state TV.