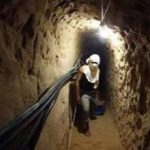 Hamas says IDF allegations it is burrowing terror tunnels underneath homes in Gaza are “lies and rumors”.
By Elad Benari – Arutz Sheva

Hamas on Monday denied Israeli allegations that it is burrowing terror tunnels underneath the homes of civilians in Gaza, saying they are “lies and rumors”.

The IDF and the Israel Security Agency (ISA or Shin Bet) last week exposed significant infrastructures belonging to Hamas in Gaza, including terrorist tunnels intended to be used as hideouts for terrorists and for the transfer of weapons.

Aerial photographs proved that Hamas takes advantage of Gazans and hides the entry shafts of the tunnels underneath houses and public buildings, such as schools and mosques.

Hamas flatly denied the claims in a statement on Monday quoted by i24news.

“Such lies and rumors are part of failed occupation policy and psychological war to influence the morale of the Palestinian people, and an attempt to legitimize crimes that may be committed against civilians in Gaza,” said the statement from Hamas spokesman Hazem Qassem.

The statement called on the media “not to deal with the lies and rumors of the occupation army,” and said that human rights groups must “do their duty to expose the intentions of the Zionist occupation and its plans to deliberately target unarmed civilians.”

Since Israel’s counterterrorism Operation Protective Edge in 2014, Hamas has been busily reconstructing its terror tunnel network breaching into Israeli territory.

A senior Israeli security official estimated several months ago that the terror group continues to dig 10 kilometers in tunnels leading into Israel per month.