Hamas agrees to talks with Fatah

Hamas agrees to talks with Fatah 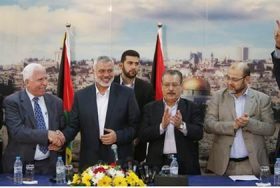 Hamas says it agrees to talks with rival Fatah as well as general elections.

The Hamas terrorist group said on Saturday it agrees to talks with its rival Fatah, Reutersreports.

In a statement, the group also expressed willingness to dissolve the Gaza administrative committee and hold general elections.

Hamas and Fatah, which is headed by Palestinian Authority (PA) chairman Mahmoud Abbas, have been at odds since 2007, when Hamas violently took control of Gaza in a bloody coup, and all attempts to reconcile the sides have failed.

The tensions have escalated recently after Hamas established an administrative board tasked with running the day-to-day affairs in Gaza. The move has escalated tensions between Hamas and the PA, which recently finally acknowledged that it has no control over Gaza and has been trying to force it to return control of the enclave by creating economic pressure on the group.

These measures include the cutting electricity supplies to Gaza through Israel and the halting of salary payments to more than 30 lawmakers affiliated with Hamas.

In a sign that reconciliation talks could restart, Hamas politburo chief Ismail Haniyeh this past week expressed a willingness to begin talks with Fatah following meetings with senior Egyptian officials.

Later, sources in Fatah said that a delegation on behalf of the group will visit Cairo within the coming days in an attempt to resolve the longstanding Fatah-Hamas conflict.