Gaza riots planned for next week

Gaza riots planned for next week 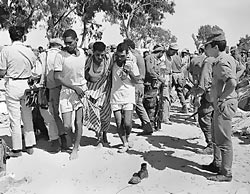 Egyptian prisoners of war help a wounded comrade as they arrive at a clearing post for prisoners set up by Israel on the Gaza strip.

Committee in charge of “March of the Return” plans mass demonstrations to mark Arab defeat during Six Day War.

The Supreme National Council of the March of the Return processions is preparing to mark the anniversary of the Arab defeat in the Six Day War in early June of 1967.

The expected activity will take place on Tuesday, June 5, in the so-called “return camps” located along the Gaza border with Israel.

The Palestinian Authority (PA) parliament will hold a meeting in one of the “return camps” in parallel with mass demonstrations that are planned against Israel. These are a continuation of the “March of the Return” demonstrations that have been characterized in recent months by a long string of attacks and attempts to harm the security fence.

Hani Thawatbeh, a member of the information committee of the processions, said that the mass marches were meant to remind that the conflict with the “occupation” is not only a Palestinian issue but a national Arab one, since the “occupation” continues in the Golan Heights, Jerusalem and the West Bank.

He added that “peaceful demonstrations” within the framework of the “processions of return” were successful because they exposed the “Nazism” of Israel to the world.

Arabs have hurled rocks, firebombs, and flaming tires at Israeli soldiers securing the border and have used makeshift “terror kites” to drop explosives on Israeli positions during the violent riots, dubbed “the March of the Return”, which began on March 30.

The riots have been openly encouraged by Hamas as well as by PA chairman Mahmoud Abbas.

The largest and most violent riots took place on May 14, the day on which the United States relocated its embassy in Israel from Tel Aviv to Jerusalem. At least 60 people were killed in clashes that day, but the majority of them were Hamas terrorists, a fact which the group itself admitted.