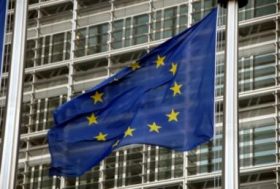 The European Union on Tuesday reacted to Iran’s announcement that it will boost uranium enrichment capacity, saying a “first assessment” indicated the plan does not breach its commitments under the 2015 nuclear deal.

“Following a first assessment, the announced steps per se are not a violation of the JCPOA,” Maja Kocijancic, spokeswoman for EU diplomatic chief Federica Mogherini, told AFP, using the official name for the agreement, the Joint Comprehensive Plan of Action (JCPOA).

“However, at this particularly critical juncture, they will not contribute to build confidence in the nature of the Iranian nuclear program,” she added.

The head of the Iran Atomic Energy Organization had said on Monday night that Iran intends to inform the UN nuclear watchdog about its start of a process to increase the country’s uranium enrichment capacity.

Salehi said on Tuesday that the expansion does not violate the JCPOA, from which President Donald Trump pulled out last month.

While Trump withdrew from the Iran deal and announced he would reimpose sanctions on Iran, the European Union did not follow suit, and said it would remain in the agreement and will do so “as long as Iran continues to implement its nuclear related commitments, as it is doing so far.”

“As stated repeatedly, we expect Iran to stick to all its JCPOA commitments, to be monitored by the IAEA, as it has been doing so far and has been confirmed by the IAEA in 11 consecutive reports,” Kocijancic reiterated to AFP on Tuesday.

“The IAEA is the only body in charge of the monitoring and verification of the implementation by Iran of its nuclear-related commitments under the JCPOA,” she said.