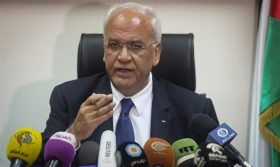 “Israel is internationally recognized as the occupying power over 100 percent of Palestine, including in and around occupied east Jerusalem,” Erekat said, according to AFP.

He said that Friedman’s comment was “not only false and misleading but contradicts international law, United Nations resolutions and also the historical U.S. position”.

“It is not the first time that Mr. David Friedman has exploited his position as U.S. ambassador to advocate and validate the Israeli government’s policies of occupation and annexation,” Erekat charged.

Friedman, speaking with the Hebrew-language news website Walla, said, “I think the settlements are part of Israel. “I think that was always the expectation when Resolution 242 was adopted in 1967. It remains today the only substantive resolution that was agreed to by everybody.”

The State Department appeared to distance itself from Friedman’s comments.

On Friday, the Yesha Council welcomed Friedman’s comments and praised the ambassador.

“Ambassador Friedman should be commended for using facts to describe the reality in a Judea and Samaria,” said Yesha Council Chief Foreign Envoy Oded Revivi. “All of the Israeli towns and cities plus all infrastructure, including roads, adds up to less than two percent of what is described as the West Bank.”

“For decades the international community has been eating-up Palestinian propaganda without checking the reality on the ground,” continued Revivi.

“Peace is about two peoples living side-by-side and was never about ethnically cleansing Jews from Judea. This Yom Kippur (Day of Atonement), it’s time the world atone for their past sins and acknowledge that our communities; where Jews and Palestinians live, drive and work alongside each other, are in fact the key to lasting peace,” he concluded.