Erdogan: Hamas is not a terrorist organization

Erdogan: Hamas is not a terrorist organization 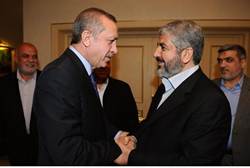 Turkish President continues to attack Israel over violence in Gaza, “reminds” Netanyahu that Hamas is a “resistance movement”.

Turkish President Recep Tayyip Erdogan on Tuesday evening claimed that Hamas is not a terrorist organization as he continued to attack Israel over the violence in Gaza.

“Reminder to Netanyahu: Hamas is not a terrorist organization and Palestinians are not terrorists. It is a resistance movement that defends the Palestinian homeland against an occupying power. The world stands in solidarity with the people of Palestine against their oppressors,” he tweeted.

Earlier on Tuesday, Erdogan accused Prime Minister Binyamin Netanyahu of having blood on his hands.

“Netanyahu is the PM of an apartheid state that has occupied a defenseless people’s lands for 60+ yrs in violation of UN resolutions. He has the blood of Palestinians on his hands and can’t cover up crimes by attacking Turkey,” Erdogan tweeted.

Netanyahu later fired back, saying, “A man who sends thousands of Turkish soldiers to hold the occupation of northern Cyprus and invades Syria will not preach to us when we defend ourselves from an attempted infiltration by Hamas.”

“A man whose hands are stained with the blood of countless Kurdish citizens in Turkey and Syria is the last one who can preach to us about combat ethics,” Netanyahu added.

Erdogan blames Israel for the violent and mass terrorist acts along the border between Israel and Gaza in recent days, which has been openly encouraged by Hamas.

Israel and Turkey signed a comprehensive reconciliation deal in 2016, ending a six-year diplomatic standoff following a violent encounter between Israeli soldiers and Islamist radicals on a ship attempting to break through the security blockade on Gaza.

However, Turkish officials, and particularly Erdogan, have continued to verbally attack and criticized Israel even after the agreement was signed.

Last month, Erdogan accused Israel of being a “terrorist state”, and called Prime Minister Binyamin Netanyahu a “terrorist”, after IDF forces opened fire on infiltrators during a Hamas-led confrontation on the Israel-Gaza border.

Last year, Erdogan described Israel as a “terrorist state” that kills children, to which Prime Minister Binyamin Netanyahu responded, “I am not used to receiving lectures about morality from a leader who bombs Kurdish villagers in his native Turkey, who jails journalists, who helps Iran go around international sanctions, and who helps terrorists, including in Gaza, kill innocent people.”