At least 25 killed in Explosion in Coptic Tanta church

At least 25 killed in Explosion in Coptic Tanta church 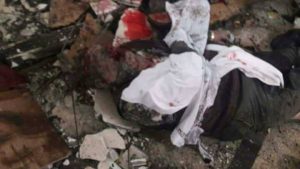 Twenty-five people were killed and at least 42 others were injured in an explosion in a Coptic Church in Tanta, Egypt on Sunday morning.
Tanta is located to the north of Cairo and southeast of Alexandria.
Initial investigations show the terrorist blew himself up during the church’s Palm Sunday services, causing mass destruction at the scene.
CBC TV showed footage from inside the church, where a large number of people gathered around what appeared to be lifeless, bloody bodies covered with papers.
No organization has claimed responsibility for the attack.
The Copts are the oldest and largest Christian denomination in Egypt, comprising some 10% of the population. Copts have been subject to violent religious persecution by Islamic extremists In just one province, 77 attacks against Copts were recorded between 2011 and 2016..