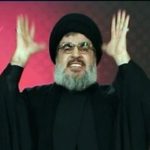 Hezbollah condemns van attack in Barcelona, says ISIS ideology is “based on hate”.

The Hezbollah terrorist group, which is backed by Iran, on Friday condemned the van attack in Barcelona that killed at least 13 people.

Thursday’s attack was claimed by the Islamic State (ISIS) group.

In a statement issued in Beirut and quoted by The Associated Press, Hezbollah said the attack must be a renewed incentive to eliminate ISIS “whose ideology is based on hate.”

The statement said that “targeting innocent civilians and killing them is part of a satanic plot being carried out by those terrorists, which aims at tarnishing the concept of jihad (holy war) and sullying the image of Islam.”

Hezbollah, a Shiite Muslim group, is fighting against ISIS, a Sunni organization, in both Lebanon and neighboring Syria, where it has sustained heavy losses.

While it condemns attacks in Europe, Hezbollah does not hesitate to target Israelis there. An attack in Burgas, Bulgaria, in 2012 was carried out by two members of Hezbollah.

Hezbollah leader Hassan Nasrallah has continued to threaten Israel even as his group has sustained heavy losses in Syria.

“Any Israeli force that enters Lebanon will be met with a great defeat and humiliation compared to the last war,” Nasrallah said in a speech marking the 11th anniversary of the Second Lebanon War.

“Israel will suffer the same defeat that it suffered in 2006 but with greater force” if it attacks Lebanon again, he warned in the televised speech.